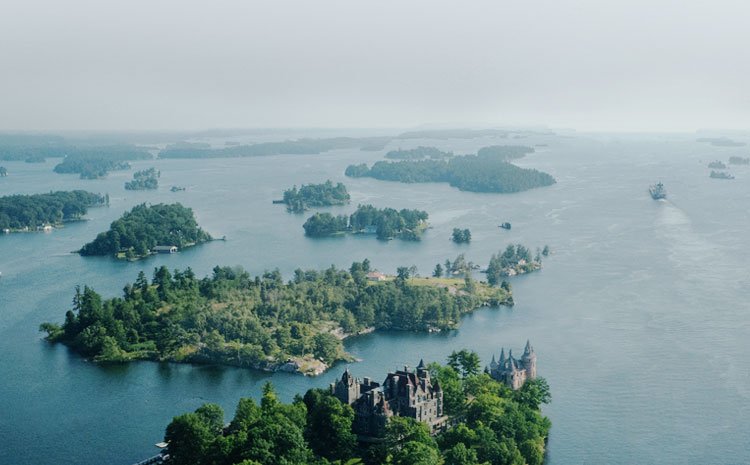 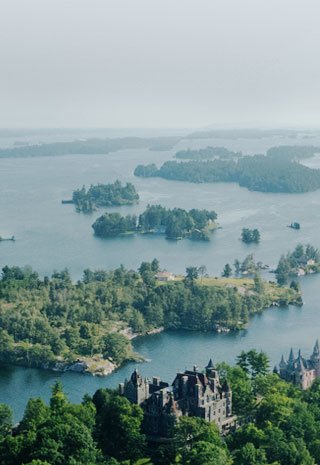 Back to the blog index

Welcome to the final chapter of our eight-part blog series with 1000 Islands Gananoque!

It has been a truly unforgettable experience for Heidi and I, exploring the majestic 1000 Islands region over the past several months. From scenic hikes to thrilling kayak adventures, luxurious accommodations, exquisite dining, vibrant art, culture and charming history – we have discovered a world of endless potential in this famous slice of South Eastern Ontario.

To end this party with a bang, we set out to embark on an unforgettable (and uniquely Canadian) experience with 1000 Islands Helicopter Tours. Winter may be here, but our thirst for adventure has yet to be quenched. Ice fishing is a beloved winter pass time for all ages and walks of life. An age-old tradition that has become woven into the fabric of our collective winter-hardy heritage.

Without further delay, join us as we take to the skies once more with #Fly1000Islands for a one of a kind ice fishing charter that is guaranteed to blow your mind.

Our departure from Gananoque was scheduled for 8:00 sharp on a chilly yet relatively clear morning. We arrived at the helipad a tad early and met up with Dave Kouri, the owner and founder of Kouri’s Kopters inc. – operators of 1000 Islands Helicopter Tours. Not only is Dave the President, but he’s also a highly skilled pilot – and would be flying us to our destination that day.

After wheeling the Raven II helicopter out onto the pad and a pre-flight series of safety checks we were soon cleared for takeoff. The radiant sunrise cast the world beneath us in a warm amber-blue glow resulting in a stunning series of views throughout our flight North.

To the North, the pretty quilted patchwork of farm fields and pastures began to give way to more rugged bush, and forests as far as the eye could see. A captivating marriage of human habitation and nature’s artistic flair along the edge of the Canadian Shield.

We watched as the first rays of sunlight chased long shadows across the ground, basking frozen rivers and lakes in a golden fiery radiance. It was a brilliant spectacle to bear witness. As we continued along our flight path, we couldn’t help but stare in awe at the beautiful mosaic of landscapes stretched out all around us.

After a breathtaking 30 minute flight from Gananoque, we were descending toward our landing zone on Beaver Lake in Erinsville, Ontario. As Dave brought us down, over the lake’s glimmering surface we could make out the ice hut, and one of the company trucks parked next to it. Without even the slightest bump, Dave then set the Raven II down for a textbook landing just outside the hut.

“This is so damn awesome!” I kept thinking to myself. It goes without saying that Heidi and I felt like a couple of rock stars or hardcore action heroes as we stepped out of the chopper and onto the glossy surface of the lake.

Waiting for us at the ice hut was Dave’s brother, Scott Kouri, who would be our host and guide for the day. After saying hello, we took a few minutes to shoot some photos of the helicopter parked on the ice next to the truck and ice hut. It was quite a thing to see. It doesn’t get much more baller than arriving to your ice fishing spot in a helicopter!

After snapping a few more photos the tiny plume of smoke coming from the ice hut’s chimney was a welcoming sight so we headed inside to warm up and start catching some fish!

“Chillin” in The Toasty Ice Hut

Inside the hut was a comfortable bench, and two fishing holes, complete with rods, tackle and a crackling fire within a little wood stove. The chill of the outdoors quickly melted away as we got comfortable and set about achieving our primary mission objective: to catch ourselves a few fish. The species that we were targeting was the small yet feisty fish known as Crappie.

To give us a tactical advantage, each ice hole was also rigged with a sonar monitor that allowed us to see our lure’s position and any fish that happened to swim over and eye up the bait. Scott advised me that when you see a fish, to entice it a little by reeling up the lure slightly out of its reach. Then, if the sonar shows the fish follow the lure, to hold still and wait for the thump of the fish as it bites the lure.

As we sat around, chatting and sharing fish stories Scott was first to land a successful catch, bringing up a fair sized specimen which he promptly removed from his hook and set outside on the ice.  Shortly after, I also lucked out and reeled in a similar sized fish with great excitement. After a few more bites, nibbles and even a tiny sunfish that we sent back down the hole – we realized that the fish seemed to be taking a break.

Scott then pulled up his line and stepped outside to get started on lunch.  We didn’t have much of a breakfast that morning so we quickly followed him out, excited at the prospect of some food. To our excitement, he had set up a propane deep fryer and was seasoning some fresh fish that was caught on the previous day!

A Delicious Fish Fry on the Lake

I had never eaten Crappie before – and yet despite the giggle-inducing name of this particular fish, it’s really quite delicious if I do say so. Lightly breaded and deep fried, these tasty petit Poisson yielded flavourful and tender meat with a rather pleasing flavour – especially when accompanied by a generous portion of french fries, coleslaw and of course macaroni salad.

This took the concept of “fresh fish” to a whole new level. Absolutely delicious!

It doesn’t get any more authentically Canadian than a good old fashioned fish-fry out on a frozen lake. It’s a great chance to enjoy the spoils of the hunt so to speak, amid the immensely beautiful scenery all around you. I could instantly see why countless Canadians and people who live in cold climates around the world love ice fishing so much.

After eating our fill of fish n’ chips we spent a few hours enjoying some more fishing and great conversation. We didn’t catch any more fish that afternoon, but it wasn’t a big deal. We had accomplished our mission and did precisely what we set out to do. We came in style, we caught some fish and we most certainly ate some fish.

As the afternoon light began to grow dim, we heard the unmistakable thrum of the helicopter engine as Dave returned and set down on the ice for our return flight.

Well, as they say in Hollywood: That’s a wrap! This was without a doubt one of the most epic adventures that Heidi and I have experienced yet, and one we won’t soon forget.

I hope that our little story has provided a good preview of what it’s like to embark on a helicopter fishing charter. This awesome adventure package is one of two options for planned fishing excursions to choose from, provided by Kouris Kopters / 1000 Islands Helicopter Tours. To perhaps entice you to take a step beyond the blog – and experience this for yourself, Heidi has put together a fantastic bonus VLOG which you can check out below.

Thanks for joining us on our adventures throughout The 1000 Islands and Gananoque! We hope that we’ve inspired you to come and visit this breathtaking destination soon!

The video was well done great job! Was wondering how much that would be ? Thanks! 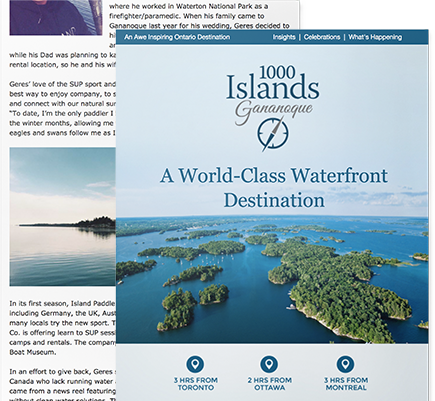 Make planning your next trip easier with exclusive
information about Gananoque and the 1000 islands.